Insects are the most successful animal on earth, and their ability to fly is a large contributor to this fact. Flying allows them to travel great distances in relatively short time intervals. Finding food, mates and favorable habitats as well as avoiding predation are some advantages of flying. It may sound easy to describe how insects fly, however it really is not easy at all. The reason for this is virtually everything about how they accomplish flight is species specific! A few characteristics shared by flying insects are as follows: proper muscles in the right places, the structure of the skeleton the muscles are attached to which enable a large amount of wing movement with a small change of muscle length, and the ability to control direction while flying. In addition to this, their ability to fly is temperature dependent. If the body temperature is to low sleight muscle contractions in the thorax will raise it up enabling maximum efficiency of muscle contractions 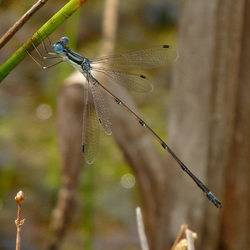 Damselflies have four large membranous wings of nearly equal size which are held together over their back when they are at rest except for the Lestidae, which hold them slightly open. Wings are usually clear except for a spot at the end of the wing called a stigma. Some species have black or red coloration in the wingsDamselflies have long thin bodies that are often brightly colored with green, blue, red, yellow, black or brown. They have oblong heads with bulging eyes and very short antennae. Aquatic immature damselflies (naiads) have elongate bodies, long legs and three leaf-like appendages or gills on the tail. These appendages are used for oxygen transport. 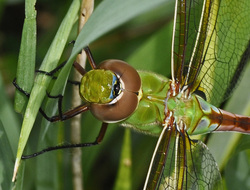 Green Darners are one of our largest dragonflies, and one of the easiest to recognize. Their bodies grow over three inches long, with a wingspan of 4 1/2 inches.Green Darners are dimorphic, which means males and females look different. Both sexes have a green thorax (middle section of body), but males have a blue abdomen (long back part of body), while females' abdomens are purplish-gray.

Both males and females have a mark like a target on their faces. Green Darners' eyes are brown.