Many types of animals are found in estuaries. In fact, the complex food web found in an estuary helps to support an amazing diversity of animals. The decaying plants are eaten by microorganisms (animals so tiny you need a microscope to see them.) The microorganisms are eaten by small invertebrates (animals without backbones.) Fish, like carp and stickleback, then eat the invertebrates. Many of the fish we eat depend upon estuaries. They are sheltered places where fish can have their young and the young fish can grow before moving out into the open ocean. Without estuaries, the number of fish in our oceans would decrease greatly. Occasionally, water in certain areas of the estuary can dry up and all that is left is a mud flat. It may seem like there is no life in this mud flat at all, but there are all kinds of mussels, shrimp, worms and other invertebrates living in the mud. Often you can see birds probing the mud with their beaks looking for a tasty meal. 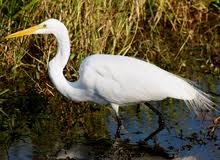 The great egret is a large heron which, as an adult, has entirely white plumage with contrasting black feet and long, black legs. Colour is added by its bright yellow bill, tipped with black, and the greenish-yellow area between the bill and the eye . Like many herons, it has a long neck that is pulled into an shaped curve when in flight . During the breeding season the great egret displays wonderful, elegant plumes on its back, which extend up to ten centimetres past the tail and are used in courtship displays. In these displays, the great egret spreads its plumes out like a fan, rather like a peacock. 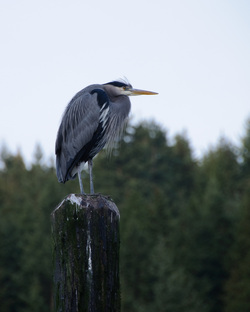 The tall, long-legged great blue heron is the most common and largest of North American herons.
Great blue herons are waders, typically seen along coastlines, in marshes, or near the shores of ponds or streams. They are expert fishers. Herons snare their aquatic prey by walking slowly, or standing still for long periods of time and waiting for fish to come within range of their long necks and blade-like bills. The deathblow is delivered with a quick thrust of the sharp bill, and the prey is swallowed whole. Great blue herons have been known to choke to death by attempting to swallow fish too large for their long, S-shaped necks. 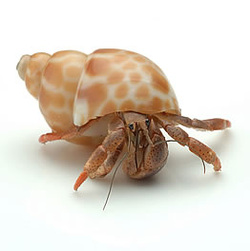 Hermit crabs are known to be one of the free swimming aquamarine saltwater
animals, that somewhat resembles a snail’s structure, minus the slow paced move.
It’s protective armor or hermit crab shells serves two purposes both
beneficial for survival and protection. Given that hermit crabs are more
commonly seen in the wild like in the sea, are there any chances that it can be
turned into a household pet? Hermit crabs are able to survive in salt water and fresh water although the
chances of survival would be much guaranteed if you provide a tank of aquamarine
salt water instead of a kitchen formulated salt water. In keeping hermit crabs
as household pet, your number one concern should be mimicking its environment
and making a friendly habitit for hermit crabs.

The mud shrimp is whitish in colour with large dark brown patches on the back and antennae the body of the mud shrimp is quite flat. The mud shrimp thrives close to the water line in areas that are periodically draine,the mud shrimp is not often noticed as it usually hides in its hole in the  bottom sediment, but on closer observation it is possible in certain areas to see the many small holes that lead to their tunnels. It is also possible to see their antennae sticking out.

The lugworm or sandworm, Arenicola marina, is a
large marine worm of the phylum Annelida.. Its coiled castings are a familiar sight on a beach at low
tide but the animal itself is rarely seen except by those who, from curiosity or
to use as fishing bait, dig the worm out of the sand. When fully grown, the lugworm of the coasts of Europe is up to 9 inches long and 3/8 inch in diameter. Other species on the North American coast range from 3 to 12 inches.
The body is like that of an earthworm: ringed or segmented. Its head end, which is blackish-red and bears no tentacles or bristles, passes into a fatter middle part which is red. This in turn passes into a thinner yellowish-red tail end. The middle part has bristles along its sides and also pairs of feathery gills. There is a well-developed system of blood vessels with red blood rich in the oxygen-carrying pigment, haemoglobin. 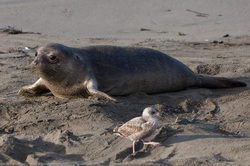 Harbor seals are brown, tan, or gray, with distinctive V-shaped nostrils. They have a rounded, spindle-shaped body. Spots or rings are visible on the dorsal surface and much more sparse on the underside. The body and flippers are short, with a proportionately large, rounded head. An adult can attain a length of 1.85 meters (6.1 ft) and a mass of 132 kilograms (290 lbs). The harbor seal is the only pinniped that breeds along Puget Sound. Pinnipeds spend part of their lives in the water but depend on land to give birth and raise young. The term "pinniped" comes from the Latin word "pinna" meaning winged and "ped" meaning foot. Harbor seals are curious but shy animals that prefer quiet, unpopulated areas. Seals like to "haul out" on protected beaches, spits, bars, rocks and log rafts to bask in the sun and sleep. 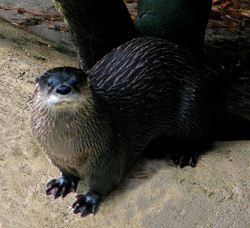 The River Otter is built for swimming - they have a streamlined body, short legs with webbed feet, dense fur that keeps otters warm, a tapered tail, small ears, and nostrils that can close underwater. They can grow to be more than a meter long, from head to tail, and weight up to 14 kg. River Otters are mammals that are relatives of the stoats, weasels, mink, badgers and wolverines. These groups of mammals are known as Mustelids. The Mustelids all have one thing in common, they all have scent glands that they use to mark off their territory. In the wild they live less than 10 years; in captivity they live 10 - 15 years. River otters are found along rivers, streams, and lakes and also in estuaries, coastal bogs, and large marine waterways such as Puget Sound and the Strait of Juan de Fuca. 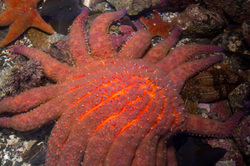 Sunflower seastars can grow to have an arm span of 1 m (3.3 ft) in diameter. Their color ranges from bright orange, yellow and red to brown and sometimes to purple, with soft, velvet-textured bodies and 16 to 24 arms with powerful suckers. Most sea star species have a mesh-like skeleton to protect their internal organs.Sunflower seastars are quick, efficient hunters, moving at an astonishing speed of 1 m/min (3.3 ft/min) using 15,000 tube feet which lie on the undersides of their bodies. They are commonly found around urchin barrens, as the sea urchin is a favorite food. They also eat clams, snails, abalone, sea cucumbers and other sea stars. In Monterey Bay, California, they will feed on dead or dying squid. Although the sunflower seastar can greatly extend its mouth, for larger prey, the stomach can extend outside the mouth to digest prey, such as gastropods like abalone.Easily stressed by predators such as large fish and other sea stars, they can shed arms to escape, which will grow back within a few weeks. They are preyed upon by the king crab. 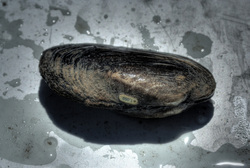 The range of this species is from Alaska to Mexico. It is similar in size and appearance to the Manila littleneck. It is a medium-size clam, oval to round in shape. The external surface is marked with concentric rings and radiating ridges which produce a cross-hatched appearance. The color is variable, but is normally cream or grey, and sometimes mottled with brown markings. The shells close completely. They have an external hinge ligament and the black siphon tips of native littlenecks are fused together. The inside edge of their shell has a fine, toothed-edge, easily seen and felt. They are found in the top 4-6 inches of substrate of gravel-mud in protected bays. Normally this clam is found somewhat higher in the tidal zone than butter clams, being concentrated at about mid tide level, but are sometimes found mixed with butter clams in the lower intertidal and subtidal zones. They occur subtidally as deep as 60 feet. Sport diggers normally use rakes, shovels or forks to obtain them. On very rare occasions they can form pearls.They are delicious when steamed open and dipped in hot butter. This clams does not live as long out of the water as the Manila. Commercially they are dug by hand and mechanical harvesters. They are sold primarily in the fresh market with a large percentage of the production shipped to California. The littleneck clam is important to sport and commercial interests. 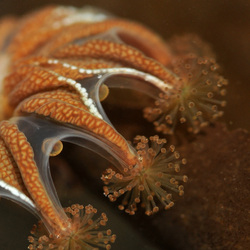 which are funnel shaped, with eight legs joined by membranes surrounding a mouth, are one example. Only an inch or two tall, they live in cold shallow water in the North Pacific. When stalked jellyfish mature, they attach themselves to a piece of seaweed or eelgrass with an adhesive disk. Scientists believe they might be able to basically cartwheel short distances, but for the most part, they are sessile – meaning they stay in the same place.

Because stalked jellyfish can’t follow prey, they use their tentacles to catch small fish and shellfish, although they have to spit out shells, as they’re too difficult to digest.

Although adult stalked jellyfish cannot eat large prey, immature jellyfish, called planula, have developed a collaborative approach to offer more dining options. At this point in their lives, the jellyfish are mobile, so while they can’t kill by themselves, they can gang up on rotifers, nematodes, copepods, and other ocean snacks. 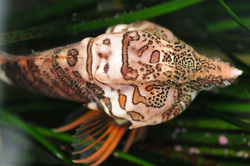 The Pacific staghorn sculpin, Leptocottus armatus, is a common sculpin (Cottidae) found in shallow coastal waters along the Pacific coast from Alaska to Baja California. The sole member of its genus, it is unusual for having spined antler-like projections on its gill covers; it can raise the projections as a defense mechanism.Staghorn sculpins are slender fish, with a grayish olive above, pale creamy yellow sides, and a white belly. The first dorsal fin has 7 spines and usually a dark spot in the posterior half, while the second dorsal has 17 rays. The anal fin also has 17 rays, while the pelvic fins have four rays. The fins have barred patterns of varying prominence. They can reach a length of 46 cm.They are common in estuaries and coastal lagoons, where they feed on a variety of invertebrates, primarily amphipods such as Corophium. 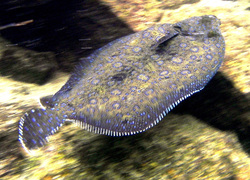 The starry flounder fishery is not large. However, the species does have some attributes that may make it an interesting species for aquaculture. First, its shape and coloration may make it a popular ornamental species. Second, it has high fecundity (900,000–11,000,000 eggs). The starry flounder also has a tolerance for a wide range of salinity (even freshwater). In addition, this species eats a variety of invertebrates, which may allow for easy acceptance of food in a laboratory setting. However, an aquarium guide does classify starry flounder as a difficult species to keep in an aquarium.